You are here: Home / Blog posts / Nature / December wildlife to spot in the UK 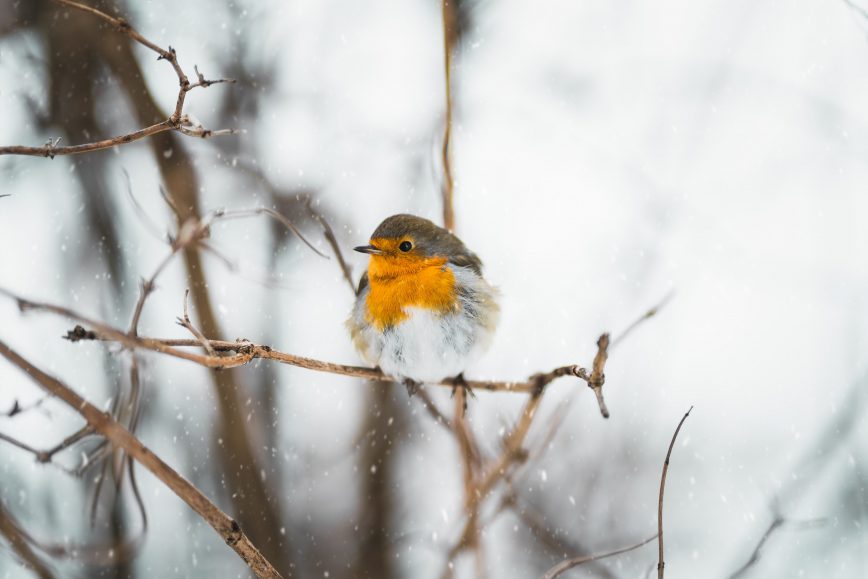 Happy December! What advent calendar do you have? Have you already opened door number 1? A new month means it’s time for the December wildlife to spot in the UK. This is my favourite post to write each month so I hope you enjoy reading it as much as I do :).

Photo by Simon on Unsplash

A male greenfinch is mainly olive-green with parts yellow on its tail and wings. The female is the same, with slightly duller colours. They are roughly the size of a Sparrow. Greenfinches mainly feed on insects and seeds, they particularly enjoy sunflower seeds. It is found in woodland, farmland, suburban and urban places and you can see them all year round.

There has been a recent decline in Greenfinches due to a parasite-induced disease called trichomonosis which is transmitted through damp bird food in feeders. Make sure you clean your bird feeders and let them dry or you could purchase one from Finches Friends which I shared in my latest gift guide.

Goldfinch is one of my favourite birds as they are so colourful. They are sociable birds, at home, we have lots coming and going on our bird feeder! They have a long and sharp beak to be able to access seeds from thistles (like the one in the photo). Goldfinches can be seen all year round, although some choose to migrate going to Spain, France and Belgium. They like parks, heathland, gardens, and orchards and are seen in farmland, urban and suburban areas. They’re mainly spotted in Southern England and feed on seeds and insects.

Robins are one of the most common UK birds as they are very confident and are seen all year round. They are especially well-known for being Christmas related and are often on Christmas cards. Robins have a memorable song which they sing throughout the day and even at night! They are certainly not fussy birds as they eat worms, seeds, fruits, insects and other invertebrates. I have been lucky enough to see a few on my window bird feeder which I love.

Starling is a black-coloured bird with specks of purple-green iridisence. It is smaller than a blackbird, has a short tail and triangular wings. A murmuration if starlings is the massive bird flocks you see flying together and creating beautiful patterns. They have a noisy call, at home there is a flock of them in a neighbour’s tree and I can hear them very well in my room!

Although they are quite common garden birds, they are actually on the red list, which means they are in critical decline. The Starling diet mainly consists of invertebrates and fruit. They are seen throughout the UK apart from Scottish Highlands and are most common in the south. Starlings can be seen all year round, a lot of birds come over in autumn to spend the winter months here.

Other December wildlife garden birds found in the UK:

Continue reading: December wildlife to spot in the UK

Although a lot of pansies flower in the spring and summer, there are some winter-hardy ones. These flowers start to bloom in autumn and carry on until spring. Deadhead the flowers to keep them in bloom longer.

Mahonia is a shrub with spikes of yellow flowers in the spring and purple berries in the autumn/winter. They start flowering in November until around March. They are easy to grow and the berries are perfect for wildlife!

Winter honeysuckle is a shrub with highly scented white creamy flowers. It is in bloom from mid-December until March. It forms its flowers in April of the following year so if you are intending to prune it, you should do that in March.

I hope you have a lovely December! As I have just over 1 week left in Bournemouth, I am trying to pack in as many fun activities whilst also doing as much studying.

Which December wildlife are you looking forward to seeing in the UK?