You are here: Home / Blog posts / Nature / August wildlife to spot in the UK 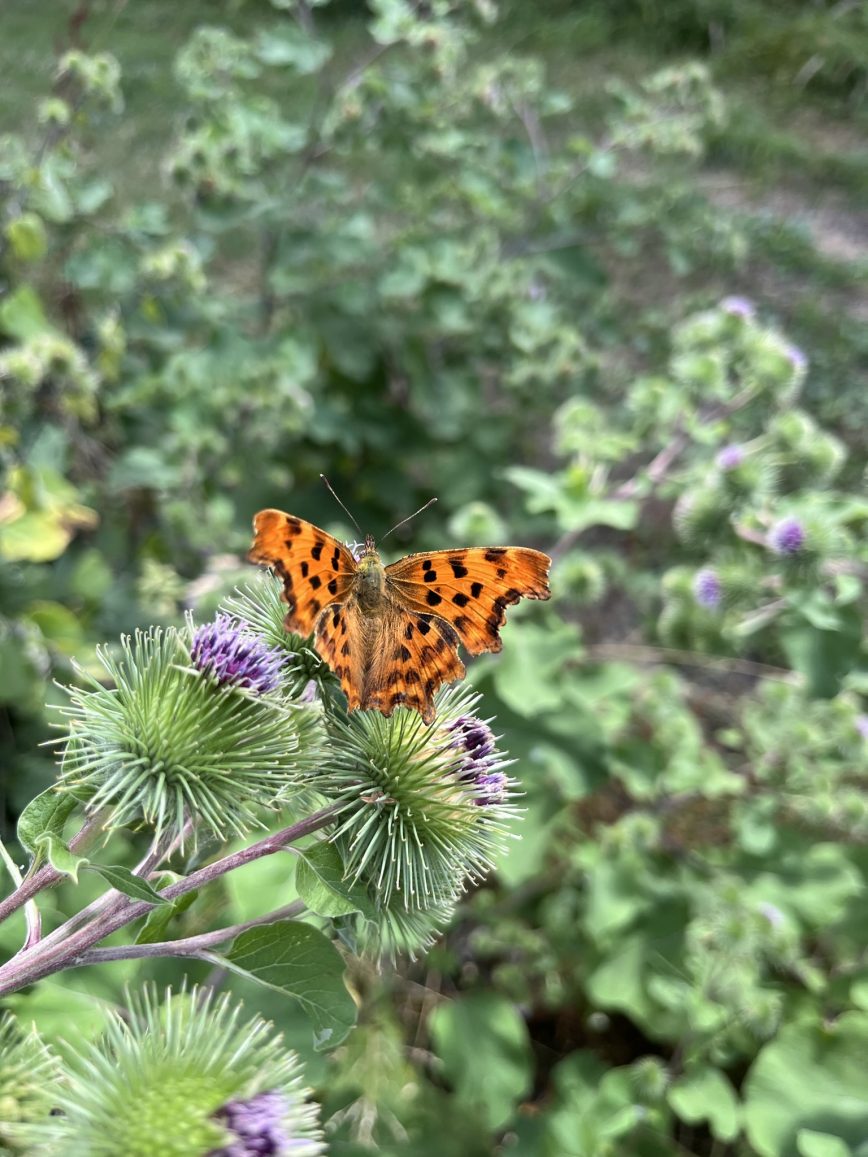 I can’t believe it’s August already! I have finished my placement and I am back home for 3 weeks. Then I’ll be volunteering for the RSPB in the Lake District which is very exciting. I have seen lots of different butterflies in July, and I am hoping to see some more in August. Continue reading to discover some August wildlife to spot in the UK.

August is a quiet month for birds as they are moulting which means they are tired. Therefore, August is the month of rest for them! Birds moult annually when their old feathers have been used and they need new ones. House Sparrows spend August wandering through farmlands to eat the ripening grains. Other birds migrate now that summer is coming to an end and the colder weather is setting in. Some birds such as Swallows and Swifts take advantage of ants that mate during this time and use them for an extra snack. A few species of birds sit on an ant’s nest to get a nice massage from them as they crawl over the feathers! For us, sunbathing gives us a good dose of Vitamin D, and this is the same with some birds. They sunbathe to absorb vitamins, but also to help any damaged feathers.

It is nearing the last couple of months of the butterfly season which I am not looking forward to. Some species have come back for a second brood, and quite a few butterflies are still seen.

The Dingy Skipper butterfly’s main brood is from late April to June, but they sometimes have a second brood in August! It has a variety of habitats such as dunes, woodlands and heathlands, with its biggest habitat being on sunny south-facing slopes. The Dingy Skipper does look very similar to the Grizzly Skipper but the latter is smaller and has a more chequered pattern. Over the years, their population of them has decreased. This is because of the decline of their foodplant, Common Birds-foot-trefoil.

The Green-veined White butterfly sometimes has as many as three generations from July until October. It favours damp areas, so is often seen near water. They are a very common butterfly, found across Scotland, Wales, England and Northern Ireland. They have quite a few foodplants, which is why they are so common. A few examples are Hedge Mustard, Charlock and Wild Radish. The butterflies love most flowers too, specifically lavender which is a good source of nectar.

My parents went to the Lake District in May and saw quite a few so I am hoping to see some too!

The Clouded Yellow butterfly is a migrant from Europe and is a regular visitor to the UK. It is mainly seen in southern England, but does work its way up north, and is scattered through Ireland. You are most likely to see them from June through to the end of October. They have a few foodplants, including Common Bird’s-foot-trefoil, cultivated Clovers and Lucerne. The butterflies favourite habitats are flowery places, near the larval foodplants.

The Small Heath butterfly is one of the most widespread grassland butterflies. They prefer places that have dry, light soils, with a mixture of grasses growing. They can be found on cliffs, woodlands, dunes and heaths. These butterflies also can have up to three broods. Often, there is one in the north and three in the south of England. They can be seen from late April to September in the southern sites. They feed on a variety of flowers, but always with their wings closed.

Continue reading: August wildlife to spot in the UK

The Scotch Argus butterfly is relatively common across Scotland, especially on the western side. You can see them from late July to early September. Scotch Argus butterflies don’t like heavy grazing and dense stands of conifers which are thought to be the reason they are mainly in Scotland. There are a couple of colonies in England that are thriving. The butterfly is very dark which makes it easier to identify.

Another species on the August wildlife list is the Grayling butterfly. It is one of the best butterflies at camouflaging themselves! They are seen throughout the UK, but mainly along the coasts in different habitats. Such as cliffs, saltmarshes, and acidic heaths. They like dry and bare land with plenty of sunlight to rest open-winged. You can see them from early July to mid-September. Some of the foodplants they like the best include Tufted Hair-grass, Early Hair-grass and Red Fescue.

The Dark Green Fritillary butterfly is found in flower-rich places such as grasslands, moorlands, dunes and scrub. They prefer damp places that other fritillary butterflies don’t like. It is seen scattered throughout the UK, but it has and is declining. The butterfly is first spotted from early June until early September. Their caterpillar foodplants include Common Dog-violet, Hairy Violet and Marsh Violet.

The White Admiral butterfly occurs in mixed conifer and deciduous plantations, as well as mature broadleaved woodlands. They thrive in hot summers, but their range of tolerance to the shade has increased their habitat area. The butterflies are seen from mid-June until the end of August. They are mainly in the south of England, with recent expansions to the west midlands. The Purple Emperor butterfly has a similar elegance and is sometimes found in the same habitat. Their only foodplant is Honeysuckle, which is normally in shady areas.

The Small Copper butterfly is found in small colonies such as on flowery hillsides, woodlands, chalk or unimproved grasslands. It flourishes in hot and sunny spots, in some years there are three or four broods produced. They can be seen from late April until November, but like with a lot of other butterflies, they are declining. Small Coppers have a wide range of habitats throughout the UK apart from in the northern parts of Scotland. Their main foodplants are Common Sorrel, Sheep’s Sorrel and sometimes Broad-leaved Dock. Common Fleabane is one of their favourite nectar sources.

The Chalk Hill Blue butterfly is one that I am hoping to see this year! It is only seen in the south of England but is quite widespread there. They occur from mid-July until September and inhabit warm chalk and limestone hillsides. It has declined because of ploughing on their habitat, but also from sheep and rabbit grazing. Chalk Hill Blues love to feed from Knapweeds and Scabiouses, and their only foodplant is Horseshoe Vetch.

Other butterflies in July:

There we have it, the August wildlife to spot in the UK! Such a lot of butterflies are out flying in the upcoming month so hopefully, we see lots.

Which August wildlife are you hoping to see?